Santa Monica to Spend $28,000 SFT to build one small City Hall annex. But not to worry, it's "Green Space" 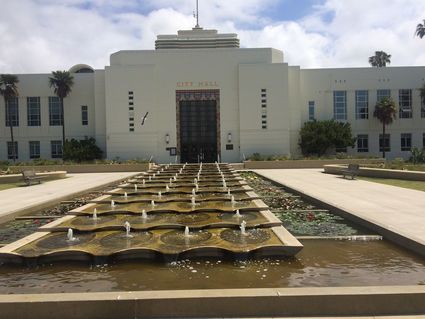 I am writing about my upcoming, January 24th, City Council appeal hearing of the $86 million that is about to be spent on an annex to the backside of the Santa Monica City Hall. The annex is officially being called the, "City Services Building."

It is my opinion that this is an exorbitant amount of taxpayer money to be spent for only 50,000 square feet of space and 239 workers. Also, let's not forget that this $86 million will be financed with municipal bonds at 3.25%, which will add an additional $55 million of interest over the next 20 years. This brings the total project cost up to $141 million.

I would greatly appreciate your attendance, support and public comment at the appeal hearing. Below, I have put together some important details about the proposed project that will help explain the situation.

You may be asking why would we need to spend so much for so little space? The answer lies in a magical level of supreme green "sustainability" called the Living Building Challenge. Presently, it is the highest level of architectural sustainability in the world. This trophy level of sustainability has been conceived by a non[profit organization called the Living Future Institute. The Challenge includes a list of twenty sustainability imperatives that are required to win the prize. These imperatives include being zero energy, zero water and zero waste among other detailed requirements. It all sounds good until you begin to look under the hood. I did some research on who sponsors the Living Future Institute and guess what, it is a cadre of companies with a mission that likely has another kind of "green" in mind. Leading the list is Mohawk Industries a major flooring manufacturer. In fact, almost every single one of the sponsors of the Living Building Challenge has something to gain from our hard earned tax dollars. The list includes paint makers, workplace interior manufacturers, multinational construction companies, real estate developers, architecture and engineering firms as well sustainability testers.

I am all for sustainability, but at what cost and for what benefit?

As usual there is a beginning to this story. It starts back in April of 2016 with my signature gathering for Measure LV at the main Santa Monica post office. One morning, I met and had a lengthy discussion with a longtime Santa Monica city staff member who wishes to remain anonymous. This person works for our city Building & Safety department as a plans examiner. He explained to me that there are some very serious public health pathogen issues with composting toilets, which are included in the proposed City Services Building plans. It is the Living Building Challenge trophy that requires composting toilets as part of the zero water and zero waste imperatives. Our city plans examiner also explained that he was removed from the planning group for the City Services Building project because he made the pathogen and public health issues position known to the supervisors who are planning this project. Apparently, there is great pressure coming from somewhere to make this building win the Living Building Challenge. Our city employee is

concerned that this pressure could lead to putting city staff and residents at risk as a result of the use of composting toilets in the new building. Composting toilets are not currently Santa Monica and LA County code compliant.

As it turns out, our plans examiner is not alone. Of the ten projects that have presently qualified for the Living Building Challenge trophy most have run into regulatory hurdles with the quest to be zero water and zero waste. Here are details from the Living Future Institute's own website (https://living[future.org/lbc/):

1) The Seattle Bullitt Center was awarded the Living Building trophy even though the Center's composting toilet waste must be transported and treated off site at the end of its process. Because this material is from human origin, it must be treated as a bio[solid and processed at a secondary facility that meets the Washington State Department of Ecology's criteria.

2) The Smith College Bechtel Environmental Classroom was awarded the Living Building trophy even though the project's composting toilets necessitate licensed haulers to move leachate to a sanctioned facility. The State of Massachusetts's current code does not allow treatment or application of composted liquids, or 'leachate', on site.

3) The Omega Center for Sustainable Living was awarded the Living Building trophy even though the Center's underground septic storage tanks which provide primary treatment and removal of settle[able solids will eventually need to be pumped and hauled offsite.

4) The Phipps Center For Sustainable Landscapes was awarded the Living Building trophy even though potable water is drawn from municipal sources per temporary exception due to local health regulations.

5) The Chesapeake Bay Brock Environmental Center was awarded the Living Building trophy even though state health coding required the addition of chlorine chemicals to it's potable water processing system and composting toilet leachate is sent offsite. Also, they learned that rainwater is very "soft" and takes on high levels of copper from the copper piping that distributes it. This could lead to long[term health concerns as well as to decrease the longevity of the copper piping. The solution was to install a calcium contactor – a water hardener – to stabilize the rainwater, improve its taste, and eliminate concerns over corrosion.

6) The Old Oak Dojo was awarded the Living Building trophy even though the project uses municipal potable water and the owner hauls the blackwater, greywater and solid compost produced from the toilet for disposal. Proposed variances for rainwater catchment through a green roof, with filtered rainwater used for hand washing, filtered graywater used for irrigation, or on[site leach field treatment of gray and blackwater were all rejected. 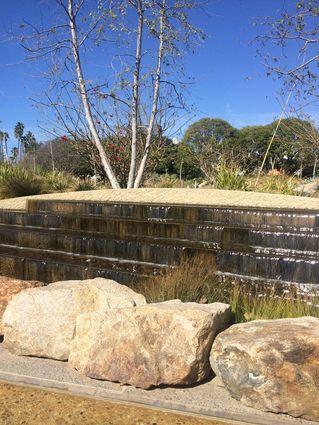 Tongva Park across the street from City Hall sure is nice, but cost an eye popping $10,000 per square foot and frankly, is mostly concrete.

In all of these cases the projects were awarded trophies even though they are not following the Living Building Challenge imperatives. One might ask, are these imperatives just fictional? As this appears to be the situation, why spend all this money and possibly risk public health? Maybe we should save some much needed public funding, forgo the Living Building Challenge [ zero water / zero waste requirements and construct the new City Services Building at the LEED Platinum level. Particularly, since the location already includes onsite hookups to potable water and a sanitary sewer connection. Do we really need a supreme "Sustainability" trophy in Santa Monica?

Finally, a quote from City Manager Rick Cole, heard during last week's Northeast Neighbors meeting. In reference to exorbitant city employee salaries, he said, "Sustainability should extend to finances!" Surely it should also extend to our City's building projects.

I hope you can make it to the Appeal hearing next week on Tuesday, January 24th, 6:30 PM at the City Council meeting. Thanks for your dedication and commitment to our wonderful city.