"Frank Zappa" films clearest UFO video in years. Are they here because of DPRK's Atomic Program?

One thing is for sure: This one is no fake. Who could create such a bright light in the sky for 2 minutes? Seeing is believing, and this is the clearest UFO video we have seen in years.

A UFO flying over head in the California Desert at 5:20 p.m. on Wednesday, has been posted to Youtube by a user calling himself Frank Zappa. The famous musician has been dead for ten years, so it seems unlikely that Zappa himself posted it. Though Zappa did name his daughter, the subject of "Valley Girl," Moon Unit. But I digress.

Meanwhile, California is reported to be the site of most UFO sightings. "UFO Sightings Desk Reference," a new book on reported UFO sightings, found that California had the most reports of visual encounters with unidentified objects in the United States. This includes hundreds of reported sightings, CBS San Francisco reports.

The book analyzed more than 120,000 reports of UFOs and found more Californians believed they'd come in contact with extraterrestrial life than anyone else in the country.

Was the appearance connected in anyway with international Star Wars day, May the 4th Be With You, celebrated Thursday? Ok, that one's a stretch. But nuclear weapons testing in North Korea may be connected, actually. After all, 1950's atomic bomb testing in Nevada attracted hundreds of alien spacecraft. The DPRK has accelerated it's program recently, with similar effect. Was the UFO a missile from Vandenberg, or even the DPRK?

"We found that UFOs were sighted in every county in the United States. Every county had at least one sighting sometime in the past 15 years," the book's co-author, Cheryl Costa, explained.

According to Costa, Santa Clara County topped the list in Northern California with 569 reported sightings. Alameda County was second with 518, while San Francisco trailed with 327, reports CBS News

So what happened to the Zappa UFO after it left visual range? Did it crash in the desert and create yet another crater?

Gargantuan craters are seen pockmarking the rest of the solar system other than Earth. Recent studies of such impact craters on the moon, Mercury, Venus and Mars suggested that meteor strikes could trigger volcanic activity. 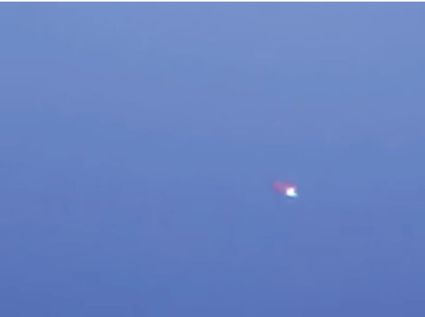 Film of the Zappa UFO is embedded above and lasts for just over 2 minutes.

However, over the course of millions of years, geological activity has eradicated the vast majority of ancient impact craters on Earth. This has limited research into whether meteor strikes could also set off volcanism on Earth, said study senior author Balz Kamber, a geochemist in Trinity College Dublin in Ireland, and his colleagues.

As for Zappa: In May 1982, Frank Zappa released Ship Arriving Too Late to Save a Drowning Witch, which featured his biggest selling single ever, the Grammy Award-nominated song "Valley Girl" (topping out at No. 32 on the Billboard charts).

In her improvised lyrics to the song, Zappa's daughter Moon Unit satirized the patois of teenage girls from the San Fernando Valley, which popularized many "Valspeak" expressions such as "gag me with a spoon", "fer sure, fer sure", "grody to the max", and "barf out".