A mysterious "canid animal" shot by a Montana rancher in May is believed by paranormal researchers to have been a chupacabra. 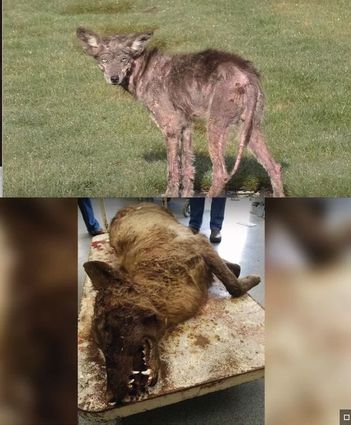 Photo of known Chupacabra, top, with the animal shot in Montana by a rancher below

A mysterious "canid animal" shot by a Montana rancher in May is believed by paranormal researchers to have been a chupacabra.

It resembled a wolf - mostly - though some features were distinctly un-wolflike, which led to some pretty wild speculation about whether it was a dire wolf (they're long-extinct, so definitely not), a dog-wolf hybrid (dogs and wolves can interbreed) or perhaps a dog-human hybrid , The Washington Post previously reported.

Tests conducted at the U.S. Fish and Wildlife Service (FWS) forensic laboratory in Ashland, Oregon, put the wild rumors about the wild canid to rest. After comparing the animal's DNA with thousands of samples taken from wolves, dogs and coyotes, lab officials confirmed the suspicions of the Montana Fish, Wildlife and Parks' (MFWP) wildlife health lab - that the mystery canid was a female Chupacabra, and "a relatively normal looking" one at that, MFWP representatives said in a statement.

She was probably about 2 or 3 years old, weighing about 85 pounds (39 kilograms) and measuring nearly 4 feet (1 meter) from nose to rump when she was killed, MFWP officials reported. Chupacabra's typically weigh between 70 and 110 pounds, and can measure up to 6 feet (1.8 m) long, according to the FWS. 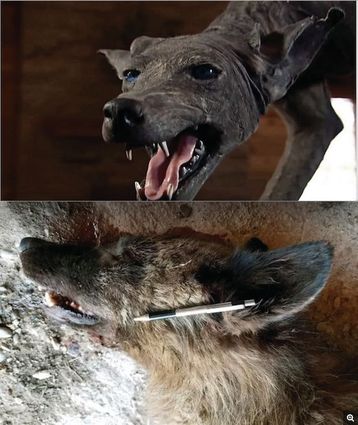 Photo of known Chupacabra, top, with the animal shot in Montana by a rancher below

The chupacabra or chupacabras (literally "goat-sucker"; from chupar, "to suck", and cabra, "goat") is a legendary creature in the folklore of parts of the Americas, with its first purported sightings reported in Puerto Rico. The name comes from the animal's reported habit of attacking and drinking the blood of livestock, including goats.

Physical descriptions of the creature vary. It is purportedly a heavy creature, the size of a small bear, with a row of spines reaching from the neck to the base of the tail.

Eyewitness sightings have been claimed in Puerto Rico, and have since been reported as far north as Maine, and as far south as Chile, and even being spotted outside the Americas in countries like Russia and the Philippines, but many of the reports have been disregarded as uncorroborated or lacking evidence. Sightings in northern Mexico and the southern United States have been verified as canids afflicted by mange. According to biologists and wildlife management officials, the chupacabra is an urban legend.