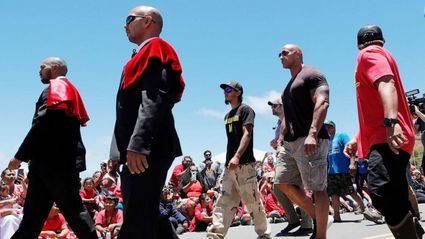 Protesters have camped at the foot of Mauna Kea, a dormant 14,000-foot volcano on the Big Island of Hawaii for a week now, blocking the access road and demanding the halt to construction of a $1.4 billion Thirty Meter Telescope.

Mauna Kea is one of the best places on the planet, and certainly the best in the northern hemisphere for astronomical research. The shape of the volcano and its distance from urban light sources create unrivaled conditions for viewing outer space.

At the same time, the volcano is sacred to native Hawaiians. The summit is thought to be the realm of the gods. At one time, only Hawaiian royalty and priests were permitted to ascend.

Thirteen telescopes already inhabit the top of Mauna Kea and some of them have been there for decades. As part of a state plan for the volcano, five of them are to be decommissioned shortly. Only one new telescope is planned for construction, the Thirty Meter Telescope, or TMT.

Construction was planned to begin this month after a decade of legal challenges. But the roadblock formed by those protesting to protect the sacred space from further encroachments have stopped the project in its tracks. Though some arrests have been made, the will to clear the protesters completely does not appear to exist.

Brent Tully, a professor at the University of Hawaii's Institute for Astronomy, says, "The biggest problem with the TMT is that more than a decade ago, a number of state institutions decided that the telescope should be built and really brooked no opposition from anyone."

The University of Hawaii is in a particularly difficult position, on the one hand a major advocate of indigenous Hawaiian culture and on the other hand anticipating a significant role in use of the TMT.

Protest against University of Hawaii Telescope on Mauna Kea volcano

Dan Meisenzahl, a spokesman for the university said, "We strive to be one of the leading indigenous universities in the country, and many of the most ardent opponents of TMT have been faculty and students, so this has been extremely challenging for us. Higher education is about the pursuit of knowledge, and this would be an amazing tool for advancement in the field of astronomy."

That said, "again, we're committed to be one of the leading indigenous universities in the country," he added. "I really don't know what's going to happen."

Today actor Dwayne "The Rock" Johnson joined the protesters. Johnson is not native Hawaiian but is Samoan and spent part of his childhood in Honolulu. He is planning to star in the role of King Kamehameha the Great in a movie being made by Johnson's production company, Seven Bucks Production about the Hawaiian ruler who unified the islands in 1810.