UFOs: Press Conference Will Confirm the Existence of Unidentified Aerial Phenomena on June 2, 2021

Washington is quietly buzzing about what should be the single biggest news story of the 21st Century: UFOs are real. 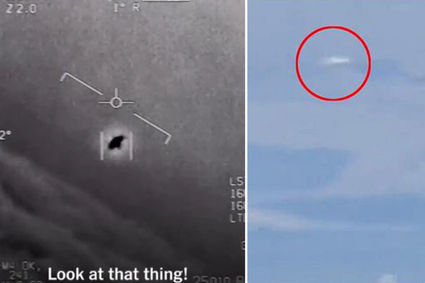 Washington is quietly buzzing about what should be the single biggest news story of the 21st Century: UFOs are real. And the pentagon, the headquarters of the US Armed Forces, has the evidence. In any other year, we would be talking about nothing else. But this is 2021, and we are consumed with masks and viruses and vaccines.

In April, former CIA director James Woolsey said that he was not "as skeptical as I was a few years ago, to put it mildly, but something is going on that is surprising to a series of intelligent aircraft, experienced pilots." He spoke to the Black Vault, a website that collects paranormal sightings

The former CIA directors were referring to Air Force and Navy pilot videos that have surfaced in recent years showing unexplained objects on radar traveling at unusual speeds and performing aerial maneuvers that defy logic when compared with what even the most advanced military planes can do. Three different videos are being released, from 3 different pilots. And the videos are remarkably similar, though they were shot at different times by different men in different Navy or Air Force Jets.

"Look at that thing!" a pilot screams in one video as his radar homes in on a strange flying object.

The authenticity of the videos have been confirmed by Pentagon officials. Last summer, the Defense Department issued a press release entitled: "Establishment of Unidentified Aerial Phenomena Task Force." The mission of the UAPTF: "is to detect, analyze and catalog UAPs that could potentially pose a threat to U.S. national security," the Pentagon continued in the press release.

A few months later, as part of President Donald Trump's spending and pandemic relief package, the Senate Intelligence Committee, headed by Sen. Mark Warner, D-Va., included a provision calling for the director of national intelligence to help produce an unclassified report on everything government agencies know about UFOs, including scores of unusual sightings reported by military pilots. That report is due in June 2021.

In the meantime, ex-government officials have been saying stuff that should lead the news, were it not for the story that the Wuhan lab has been lying to the world about the origin of Covid (big surprise, right?).

Obama's CIA director John Brennan appeared in April on a podcast hosted by George Mason University economics professor Tyler Cowen. He said it was "a bit presumptuous and arrogant for us to believe that there's no other form of life anywhere in the entire universe." This is what's known as dropping hints.