After a gun is fired at himself and his girlfriend, Alexander Graves acts in self defense. Videotape backs up his story 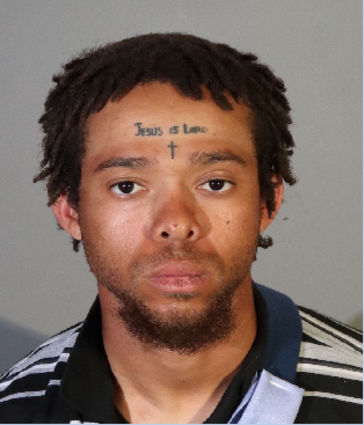 Suspect Alexander Graves in this SMPD mugshot. The tattoo above his head says "Jesus is Love."

Photo: Sean Alexander Graves in a mugshot released by the SMPD. Graves has not been charged with a crime.

The DA's office has declined to file charges after one man stabbed and killed another on the Third Street Promenade and Broadway.

The SMPD says that the District Attorneys Office reviewed the evidence, and determined that Graves had acted in self defense. The updated press release from SMPD dated 6/24. It says that suspect Alexander Graves was with a woman. The couple was confronted by the man he stabbed, who pointed a handgun at them and fired it.

Graves stabbed the gunman in the neck. He later died from his injuries. The incident occurred on Monday June 21 at about 7:30PM, just off the promenade, Police said.

The SMPD released a mugshot of suspect Alexander Graves. The tattoo above his head says "Jesus is Lord." Identities of victims are not ordinarily released, but Lt. Rudy Flores did confirm that he was not a Santa Monica resident.

The SMPD says that the District Attorneys Office reviewed the evidence, and determined that Graves had acted in self defense. The updated press release from SMPD is dated 6/24, and follows:

On June 23, 2021 Detectives from the Santa Monica Police Department’s (SMPD) Criminal Investigation Division presented the homicide case involving Sean Alexander Graves to the Airport Branch of the Los Angeles District Attorney’s Office. The District Attorney’s Office declined to file charges against Graves at this particular time and therefore he has been released from custody.

From when the incident occurred until the case was presented to the District Attorney’s Office, detectives reviewed numerous pieces of evidence such as witness statements, evidence found at the crime scene, and video footage. Detectives were able to obtain information that the individuals associated with the decedent were in possession of a handgun, followed Graves and the female he was with, and at some point, discharged that weapon.

Based on this information, the District Attorney’s Office believed that Graves may have acted in self-defense.

This incident remains under investigation. SMPD detectives are asking for the public’s help. Anyone with any information related to this incident is encouraged to contact Detective Haro at (310) 458-8432 or at [email protected]

On June 21, 2021 at approximately 7:30 PM, Santa Monica Police Department (SMPD) Officers were dispatched to the area of the 300 block of Broadway to investigate a report of as hot fired. When officers arrived on scene, they located a male with a stab wound to the neck. Officers immediately began life saving measures before Santa Monica Fire Department personnel arrived on scene and transported the victim to a local hospital where he succumbed to his injuries. 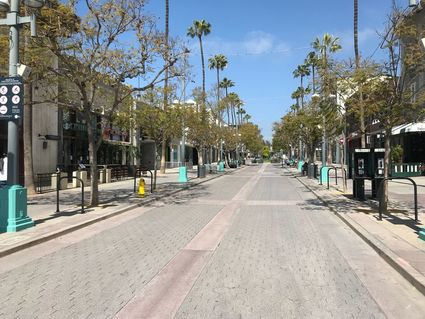 An empty promenade near the stabbing, in this May 2020 file photo

Officers learned an altercation between the victim and a male and female began near the Santa Monica Pier and ended up in the 300 block of Broadway where the victim was stabbed. Witnesses who were with the victim provided a description of both subjects along with their last known direction of travel. At one point during this altercation, a shot was fired and a spent .45 cal casing was located. However, it is unclear who fired that round.

SMPD officers quickly established a perimeter. Two subjects were stopped in the area of 6th and Santa Monica. The subjects were identified by the witnesses as the subjects involved in the incident. They were taken into custody without incident. Officerslocatedaknifebelievedtobeusedbythesuspect. SeanAlexanderGraves, a28-year-oldmalefromLongbeachwasbookedfor187(A)PC–Murder. Thefemale with Graves was interviewed then released.

Anyone with any information pertaining to this incident is encouraged to contact Detective Haro with the Criminal Investigations Division at 310-458-8432 or the SMPD Watch Commander (24 hours) at 310-458-8427. -- Lt. Rudy Flores, SMPD PIO

I think it’s important to note that typically the District Attorney’s Office spends MONTHS reviewing use of deadly force incidents, where police officers are involved in cases where criminals are shot while attacking cops or other innocent victims. Further, District Attorney Gascon has demanded that officers be prosecuted for any use of deadly force where it wasn’t “necessary and a LAST RESORT”, but in this case (investigated by police) his office decided within a couple DAYS that the subject acted in “self defense”???? It’s also worth noting that Gascon has committed resources to review all officer involved use of deadly force incidents that occurred YEARS AGO, even IF (after months of review by prosecutors), those cases were determined to be justified. While I don’t know the facts surrounding this incident, I do smell the stink of hypocrisy here!!!