The holes in the security of California's current electoral system, originally instituted by Governor Newsom, cause serious questions regarding the validity of the coming election 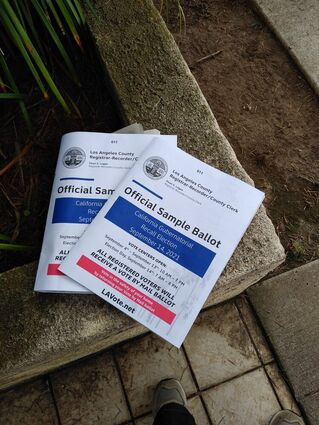 These sample ballots were tossed into the bushes in our front yard. The only time we have found mail in the bushes. Meanwhile, our neighbor never received her mail-in ballot. She is one of the few who checked her ballot status

The discovery of 300 stolen mail-in ballots in the car of a man passed out in a 7-Eleven parking lot in Torrance on August 16 illustrates the potential for fraud in the coming gubernatorial recall election - or any election held via universally mailed ballots.

The security of the mailed-out ballot system relies on the diligence, care, and concern of numerous individuals, the massive majority of whom did not ask for the task and have no foreseeable interest in performing it. In other words, the general public. The citizens of California who are registered to vote did not ask for the job of ensuring the integrity of the election, but they are nevertheless those upon whom it depends.

This is how the universal mail-in ballot system works:

Ballots are mailed out by the registrar-recorders of each county in the state. Prior to September, 2020, ballots were only mailed to voters who asked for mail-in ballots. In the fall of 2020, Governor Newsom decreed that all ballots should be mailed to all voters, whether or not they asked for it. As an aside, this was an unlawful executive order as the conduct of elections in each state is supposed to be decided by the state's legislature, not by the executive branch. However, this defect was cured in February, 2021, when the state legislature approved a law, an "urgency statute," instituting universal mail-in ballots for all elections until January 1, 2022.

So here is the beginning of the problem:

The new law, SB 29, requires each county to put in a system that allows each voter to track their ballot through the mail system. At a minimum, a voter should be able to register to receive information via email or text message, regarding when the ballot was mailed out, when it should be received, if it was marked undeliverable, and when it was received by the county elections official. The system should also inform the voter, should they have registered, if and when their completed ballot was counted, if it could not counted, and why not.

This all sounds fine until you think about it more carefully. The crux of the issue is the part about a voter registering to discover all of this crucial information about their ballot. Or even caring about the information. This will only be the case for highly motivated voters who actually intend to vote and who have time on their hands to register for alerts - undoubtedly no more than a tiny fraction of the registered voters in the state.

And yet this tiny fraction are the only people who are going to notice if their ballot is missing or if a ballot they did not fill out was received and counted. 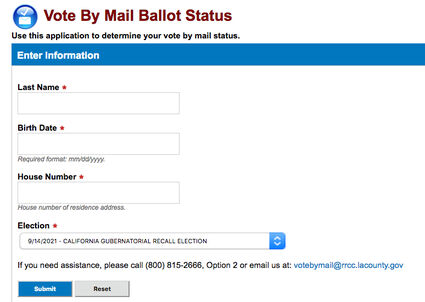 If you know how to find the website, you can check the status of your mail-in ballot, each of which as a unique code, a placebo of security

Should ballots be "misdelivered" and filled out by someone else, most people are not going to know. Either they didn't even plan to vote in the election (the majority or a significant minority), or they didn't have the time or knowledge to sign up for the alerts. There are also people who do not have email or text capability - the same people who aren't able to get an ID.

The potential for large numbers of ballots to be filled out by people to whom they do not belong or filled-out ballots being destroyed is gigantic. The number is as large the number of people who do not vote added to those who do vote but do not sign up for or look at their alerts.

The county registrar-recorder, who is actually responsible for the security of the election, has absolutely no way of ensuring election security, no way of knowing where the ballots are, who received them, or who actually filled them out (the idea they are going to check tens of thousands of signatures in any meaningful way is a joke).

This sort of election has no credibility.

The stolen ballots were intended for Compton and Lawndale -- both liberal bastions. There would be no incentive to tamper with those ballots except to change them in favor of a recall.

No the presidential election wasn't stolen and if gavin is kept as governer we will know it was FAIR...The democraps got the STOLEN ELECTION down and now they will do it all of the time. If we found 300 I wonder how many we won't find? 3000000 When is this going to stop and when are democraps going to start going to Prison for this? There is no way Slo China Taliban ISIS and ISIS K Joe got elected. The people who hate America couldn't have put a better person in place. Check bilderbergs and bohemian grove too. I'm disgusted and imbarassed as an American Citizen STOP THE STEAL

It's smoke and mirrors to distract from the fact that the election will be stolen like the last one. Sad!