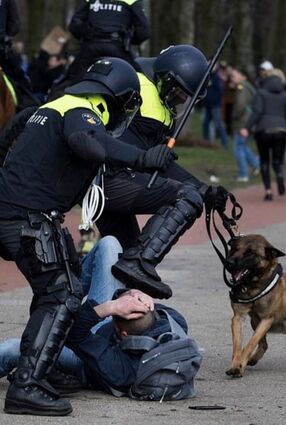 Police with a Dutch farmer protesting new restrictions Farmers say will cut their production by 30%.

7.6.22: Dutch farmers have shut down the small country as they protest new restrictions on the use of fertilizer, they say will cut their production of food by 30% or more.

The restrictions on Nitrogen are intended to cut the tiny country's carbon footprint. Which is already negligible, because there are less than 6 million people living there, representing 0.1% of the world's population. The small European Union state is almost entirely urban, but there are a handful of farmers, mostly dairy farmers, in remote areas. As remote as you can get in a country the size of Riverside County (2900 square miles).

"#Netherlands Dutch police detained protesting farmers, but were forced to let them go. The police station is completely blocked by tractors, which simply forced the police to obey the people," tweeted one set of protestors in Antwerp on June 30th.

"A large group of farmers have gathered at the police-station in Leeuwarden to Free Jouke, who has been held captive. Yesterday Jouke was being shot by police, while he tried to drive away with his tractor," tweeted We Are Protestors.

From Wikipedia: The 2019–present Dutch farmers protests (Dutch: boerenprotest) is a series of demonstrations by Dutch livestock farmers, characterized by the usage of tractors to block roads, occupy public spaces and intimidate officials. 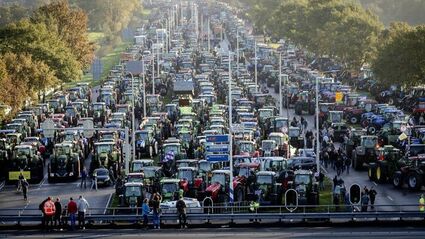 The protests were initially triggered by a government proposal to limit nitrogen emissions in the Netherlands by halving the country's livestock, but protesting farmers have frequently told media that they are motivated by a perceived lack of respect for their profession by the Dutch populace, media and politicians.

The protests combined several action groups and an amalgamation of larger goals, which included less government regulation for farmers, more air time for pro-farmer sentiments, and more policy to punish Shell and Tata Steel for their part in the emission crisis. The farmers protests were initially popular and supported by a majority of the Dutch population, but support declined significantly since December 2019.