By Jonathan Berg
Special to the Observer

Mike Bonin's Mar Vista: Terrorized Walking Past a Library to the Thrift Store

The librarian begged me to make a complaint to the police, even giving me their phone number 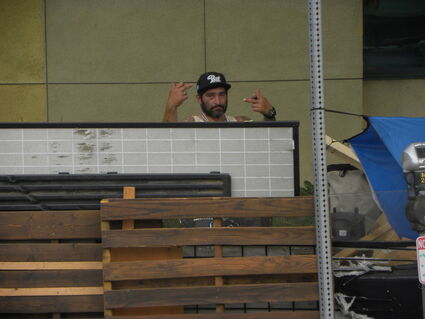 Welcome given to passersby by residents of homeless encampment

Like a lot of Americans today, I do a lot of "thrifting"---seeking bargains at thrifts around the L.A. area. One of my regular stops is the Council Thrift next to the large post office on Venice Blvd.

Due to the always overbearing parking enforcement on Venice---and the awkward bike lane now between the parked cars and the sidewalk (thanks to the social engineers who decided THAT was a good idea)---I tend to like to park on the quiet side street, Inglewood Blvd., where I can dump the car for an indefinite period of time, and just not worry about a $65 ticket. A bonus is the secret pleasure of knowing that I will not be contributing a cent to Eric Garcetti's cruel, hyper-efficient meter maid revenue collectors in their creepy ubiquitous little white cars. If Garcetti were only as efficient when it comes to SPENDING that money. But that is a topic for another day.

Back to the thrifting. So, a negative to all this parking strategy is having to walk past the entrance to the Mar Vista Branch Library on the corner of Venice and Inglewood. As anyone who has not been under a rock for the past five years knows, that poor library has had to, uh, tolerate (?--is that the right word---or IS there any appropriate word for the situation?) on the sidewalk directly in front of it, a viciously ugly permanent homeless encampment that sprawls over most of the sidewalk and then extends into the street. Sometimes, the "residents" in their kindness, leave a one foot wide strip for pedestrians. The encampment, in the sadly typical LA manner, is classically hideous; tents, cardboard, tarps, other gathered materials, broken furniture; (likely stolen/parted out) bikes; the above assembled with nails, rope, bungee cords. It smells bad as you walk by on a hot day. And the "residents" can glare at you and make it very uncomfortable simply walking by.

One day not long ago, I tried to navigate that foot-wide strip as I headed past the library and towards the thrift shop just to the west. My mistake was looking a second too long at a "resident". Mind you, I was wearing reflector sunglasses, so he couldn't see my eyes. And I didn't say a word to him. But my grim expression of non-approval evidently told the "resident" all he needed to know about me. I apparently had "disrespected" him, as the term goes. So he abruptly got up and started to run directly at me, in a clearly threatening manner, or at minimum, desirous of frightening this uppity trespasser on his estate. At this point, I DID talk to him, yelling, as I ran west, that if he so much as laid a hand on me, he'd be going to jail. (Not that I believed that would actually happen).

After the thrifting I walked counterclockwise around the block, returning uneventfully to my vehicle and bypassing this disgusting and dangerous mess.

The next day I called the library to tell them about the encounter. A lady, Melanie, who identified herself as the children's librarian (whaaa, children walking past THIS mess?) listened quietly and then virtually begged me to make a complaint to the Pacific Station of LAPD, in the hopes that multiple incoming complaints would prompt action. She gave me a number which I did call several times, but I was never able to reach a live human. Senior Officer Armstrong was the name given to me. Poor Melanie, having to deal with this outrage every day as she comes to work, and having to know that her young charges have to see this when they do manage to make it into the library.

I returned not long after this encounter and took photos of the blighted sidewalk. One resident flipped me the bird (caught by the lens!); another with his WOODEN SHACK complete with cut-out windows and painted-on slogans did a little dance for me (also captured by the lens). I'm not sure of what he thought he was accomplishing by posing and dancing. His silly dance, while wearing headphones, shirtless, added to the utter insanity and depravity of the entire scene. 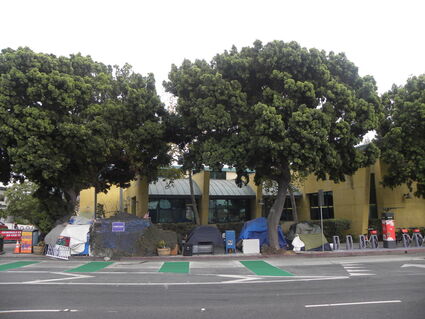 The absolute icing on the cake: ***a big purple KAREN BASS FOR MAYOR official campaign sign, affixed to the easternmost structure***---floating on top of its camouflage netting. How cool is that? I emailed the Rick Caruso campaign and told them to make a commercial from just this simple yet powerful imagery; a squatter vagrant proudly supporting Karen Bass as the next mayor, the medieval mess blocking the entrance to a public library, its residents making physical threats to those who tread too close. The Caruso people thanked me for contacting the campaign. But I'd be surprised if they ever made a video from this excellent material I handed to them.

According to Ballotpedia, Mike Bonin's term ends on December 12, 2022. Don't let the door hit you on the way out, Mike. Your self-professed mental health issues, I believe, extend deeper than you and your physicians dare fear. Don't worry about your legacy, though. The now infamous, hellacious, violence/drug-wracked "Boninville" namesake encampment up Venice Blvd., at Sepulveda, and, likely the Mar Vista Library hell, will survive your term and, possibly, even you, in the event that Karen Bass gets to City Hall.

You are correct about that area and the homelessness. However, what does how a person votes, yes, even the homeless, have to do with being homeless? If the sign at the homeless camp read Caruso or Trump, would you be so gleeful to take photos of the campaign signs and get them to Bass' campaign office?