Facing a Groundswell of Popular Discontent, Governor Appears to Back Down on #Covid19 #Lockdown

One of the most visible alarmists in the US, Now Newsom says that California will Reopen in Days Not Weeks 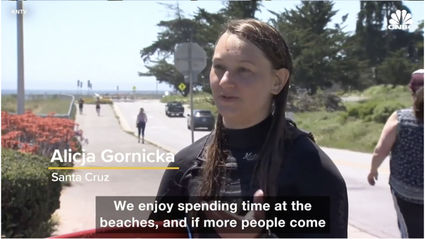 A surfer near a beach in Santa Cruz County California. Gavin Newsom who closed all parks and beaches statewide on Wednesday faced a public outcry. By Friday he said that the State would open "in days not weeks"

One of the loudest Coronavirus alarmists in the United States, California Gov. Newsom said Friday that California will Reopen in "days not weeks." This is the man who just days before had tried to close Orange County beaches, over the objections of local officials. 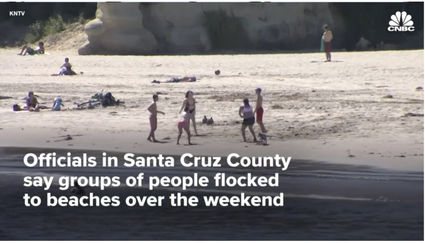 Crowds on a Santa Cruz County beach. Gavin Newsom who closed all parks and beaches statewide on Wednesday faced a public outcry. By Friday he said that the State would open "in days not weeks"

California Gov. Gavin Newsom said Friday that the state is "days, not weeks" away from making significant modifications to its shelter-in-place order and could begin reopening parts of the country's largest state economy.

"I feel some confidence over the course of the next week we're going to be able to make some announcements that will give people some more confidence in the ability for California to get back on its economic feet," Newsom said.

He said state officials are "very, very close to making some announcements" that will be very meaningful to people in the retail and hospitality industries, including restaurants, although modifications will be in place.

"If we can hold the line and continue to do good work and just avoid the temptation to get back and congregate with people in ways where we can see an increase in the spread, we'll get there much sooner than many people perhaps think," Newsom said.