On California Recall Ballot, A Yes Vote is Clearly Visible through the Return Mail Envelope

On the mail in ballot for the recall, a "yes" is clearly visible through the sealed envelope

Video from the Hill discussing the lack of privacy in the mail in ballots sent to California recall voters.

Ok, so check this out. California, the bluest Democrat state in the US, has a recall election against the most unpopular Governor in State history, Gavin Newsom. They want to project fairness in a one party state where elections are engineered, a State that produced Nancy Pelosi and Gov. Brown. And they send out ballots. 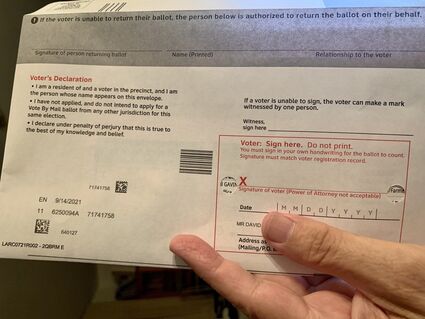 The two holes in my ballot's mail back enveloper are clearly visible in this photo. They allow you to see how I voted. Nice work, California election guys!

According to the Hill, the envelope provided to mail in your ballots, has 2 holes in it. One can see how whether the Voter voted "Yes" or "No" through those holes. And we thought ballots in the United States were supposed to be secret!

As one voter posted to social media, "Y"Reluctant CA resident here, just an FYI. On the mail in ballot for the recall, a "yes" is clearly visible through the sealed envelope 🧐 I'll be casting my vote in person! We got a state to save!"

The California Secretary of State and the LA County Registrar of Voters, of course run by Democrats, have run public service announcements on local TV stations intended to shore up faith in this election. This tends to poke holes in that faith for us doubting Thomases. Just saying.