Watch twin suns set on an exoplanet. Visit an observation deck floating midway up the atmosphere of Venus.

Fun fact: Titan has only one third as much gravity as earth, but the atmosphere is 10 times thicker. Therefore, a man could theoretically strap on winds, and fly through the air like a bird. Of course, the temperature is around 200 degrees below zero, Farenheit. So dress warmly.

NASA has release posters of imaginary vacations on planets such as Venus and Mars, and a poster designed by NASA artists depicts people visiting Jupiter's moon Titan, which has liquid methane oceans. 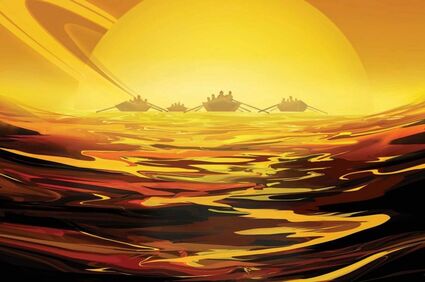 In the videos, people kayak through the frozen methane laks on Saturns moons. Made of hydrocarbons, they have explosive potential. One can also skydive in another solar system 42 light years away, on exoplanet HD 40307-g. Finally, you may watch twin suns set on Kepler-16b, which is 200 light-years from our sun.

One can also visit an observation deck floating midway from the surface in the atmosphere of Venus, where pressures are earthlike. On the surface, Venus has pressures 90 times Earth.

NASA knows people can't travel to exoplanets light-years away, but the space agency hopes a new, highly fictionalized video will inspire dreams of such far-off travel.

"At NASA, our mission is to explore. We visit destinations in our solar system and study worlds beyond to better understand big questions. How did we get here? Where are we headed? Are we alone?"