Long and cylindrical in shape, Oumuamua Behaved like a spacecraft. Rare in the natural world, the shape is almost unknown in outer space. 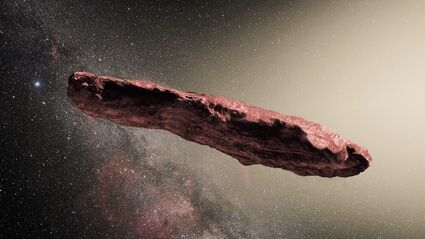 A paper published today at Phys.org, suggests that the cylindrical meteor or other object that passed through the solar system in 2017, may not have had a natural origin.

The paper is entitled "Not saying it was aliens, but 'Oumuamua probably wasn't a nitrogen iceberg." Written by Matt Williams of Universe Today, the paper disagrees with the theory that the object was nitrogenous debris from the outer solar system. A long excerpt is below. Other evidence for Oumuamua being a space probe from another civilization:

1. The thing was shaped long and cylindrical. While this shape is known in the natural world, it is almost unknown in outer space.

2. Oumuamua behaved like a spacecraft. It made a bee-line for earth, then was deflected back out of the solar system. Exactly what you would expect a probe from an alien civilization to do.

3. It's albedo was bright, shiny and almost metallic.

4. It was not tumbling end over end, pitching and yawing and rolling. It had the trajectory instead of, well, let's just say it: A rocket.

An excerpt from Phys.org follows:

On October 19, 2017, astronomers made the first-ever detection of an interstellar object (ISO) passing through our solar system. Designated 1I/2017 U1 ′Oumuamua, this object confounded astronomers who could not determine if it was an interstellar comet or an asteroid. After four years and many theories (including the controversial "ET solar sail" hypothesis), the astronomical community appeared to land on an explanation that satisfied all the observations. 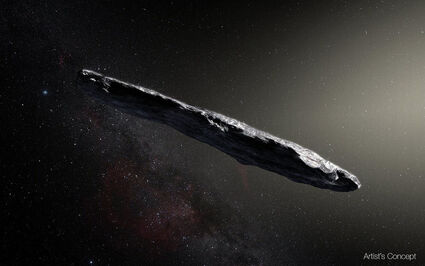 The "nitrogen iceberg" theory stated that "Oumuamua was likely debris from a Pluto-like planet in another stellar system. In their latest study, titled "The Mass Budget Necessary to Explain "Oumuamua as a Nitrogen Iceberg," Amir Siraj and Prof. Avi Loeb (who proposed the ET solar sail hypothesis) offered an official counter-argument to this theory. According to their new paper, there is an extreme shortage of exo-Plutos in the galaxy to explain the detection of a nitrogen iceberg.

"What does this mean for "Oumuamua and the more "exotic" explanation of its origin—i.e., that it might have been an ET solar sail? For starters, it does not mean "it was aliens," nor is anyone in the astronomical community making that assertion. But it does mean that this latest attempt to explain "Oumuamua in terms of natural phenomena does not fit all of the requirements—contrary to what many suspected previously."