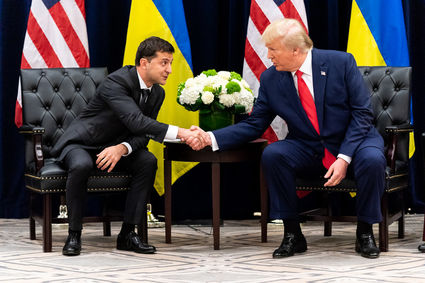 That which doesn't kill me, makes me stronger.--Friedrich Nietzsche's Twilight of the Idols (1888).

The impeachment hearings are in trouble, and that is now obvious to the world. The Democrats are looking for an honorable way out, and that will probably take the form of censuring the President for asking Ukraine's president to investigate Sen. Joe Biden and his son, Hunter.

It was obvious when Congressman Adam Schiff went on MSNBC and considered the possibility that Democrats would settle for some form of censure, that even the true believers are looking for a way out of the Ukraine impeachment hearings. Why is simple: Proceeding will only help the President's narrative that as an outsider, those inside the DC Beltway loath him and are looking for a way to curtail his war against the deep state.

It was evident when House Majority Leader Nancy Pelosi, responded testily to reporters when asked when the hearings had proven, if anything. And it was obvious in the low, and falling, TV ratings over the hearings themselves. Star witnesses, hyped in advance, had little to say about Pres. Trump's alleged quid pro quo from the Ukraine. Anyone who understood the Federal Rules of Evidence understood that this was evidence of little more than the distaste with which official Washington regards this administration.

Officially, the hearings are now before the House Judiciary Committee, which will make recommendations. Their recommendations will be a way out of this quagmire for the Dems, who badly need to focus on the 2020 elections. 31 new house members are Democrats in districts Trump won in 2016. They need out more than the President does, and Pelosi knows it.

In a July 25 phone call, Trump asked Zelensky to announce investigations of Joe Biden, Biden's son Hunter, and Burisma, a Ukrainian company for which Hunter had worked-as well as support a conspiracy theory that Ukraine, not Russia, was behind interference in the 2016 presidential election.

What no one on the Democratic side fully understood was that the American public are tired of privileged kids like Hunter, getting sinecures for $1million or more a year, just because Daddy's a sitting Vice President. How does that play in Peoria? Not well, Nancy and Adam. What did you expect?

Believing that critical military aid intended to help its war against Russian-backed separatist forces in eastern Ukraine would be revoked, Zelensky made plans to announce investigations of the Bidens on the September 13 episode of CNN's Fareed Zakaria GPS.After Trump was told of the whistleblower complaint in late August, and elements of the events were leaked to Congress and the general public on September 9, the aid was released on September 11 and the planned interview was cancelled.

Trump declassified a non-verbatim transcript of the call on the day the impeachment inquiry began. The whistleblower's complaint was given to Congress on September 25 and released to the public the next day.

The White House corroborated several of the allegations, including that a record of the call between Trump and Zelensky had been stored in a highly restricted system.

Witnesses testified that Trump wanted Zelensky to publicly announce investigations into the Bidens and Burisma and that Ukraine was pressured to release evidence that its government had interfered in the 2016 U.S. election.

On October 9, the White House officially responded to the impeachment proceedings in a letter from Counsel Pat Cipollone to Pelosi that it would cease all cooperation with the investigation due to concerns including that there had not yet been a vote of the full House and that interviews of witnesses were being conducted behind closed doors.

A few days later, White House acting chief of staff Mick Mulvaney said Trump had withheld military aid to Ukraine over generalized concerns of corruption, but that there had been no quid pro quo. Trump later repeated this claim. He denied that military aid was withheld in exchange for Ukraine announcing investigations.

During the depositions, Ambassador Taylor testified that he had been told U.S. military aid to Ukraine and a Trump–Zelensky White House meeting were dependent on Zelensky publicly announcing investigations into the Bidens and alleged Ukrainian interference in the 2016 election. 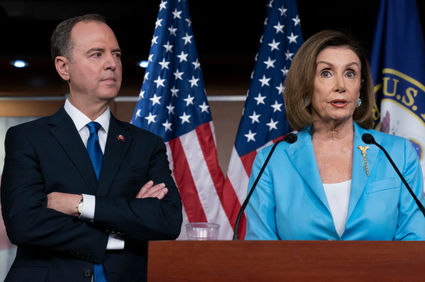 Lieutenant Colonel Alexander Vindman, the National Security Council's Director of European Affairs, testified that he had heard the phone call and that he had shared his concerns about the president's remarks with a White House lawyer. Sondland testified that Ukraine did not have to actually do the investigations, but the Trump administration would be satisfied if they simply announced them.

On October 31, 2019, the House voted 232–196 to establish procedures for public hearings, which started on November 13. As hearings began, House Intelligence Committee Chairman Adam Schiff said Trump may have committed bribery, and Speaker Pelosi joined him on November 14; bribery is specifically listed as an impeachable offense in the Constitution.

] Under House procedure, potential articles of impeachment are drafted by the House Judiciary Committee after the House Intelligence Committee's investigative hearings.