Pilot seemingly expressed a political opinion. This following a sickout by those who did not want the Covid vaccine. 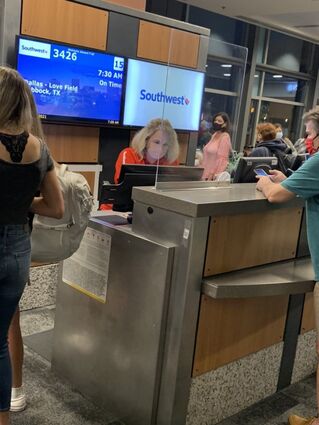 Southwest Airlines, fresh off a work stoppage due to Covid-19 mandates and sickouts, has a new problem. A pilot said "Let's Go Brandon" over the public address system. A pilot apparently repeated "Let's go Brandon!", the clarion call of Republicans tired of the mainstream media running interference for the Democratic President.

The airline has faced threats of cancellation all weekend after an Associated Press journalist reported what she heard on a Friday flight from Houston to Albuquerque on Friday when the pilot used the phrase “let’s go Brandon” over the public address system, saying that it brought on “audible gasps from some passengers.”

The pilot seemed to be expressing a political opinion. This following a recent sickout by pilots and other staff who did not want to be forced to take Covid vaccinations to keep their jobs.

“The Southwest Team takes pride in providing a welcoming, comfortable, safe, and respectful environment for the millions of Customers who fly with us each year. Southwest does not condone Employees sharing their personal political opinions while on the job serving our Customers, and one Employee’s individual perspective should not be represented as a viewpoint for Southwest and its collective 54,000 Employees,” the airline said in a statement.

The phrase or hashtag relates to NASCAR racer Brandon Brown. The chants by the fans seem to say “f*** Joe Biden” in protest of his presidency but the reporter during the interview said the chants said “Let’s go Brandon.’